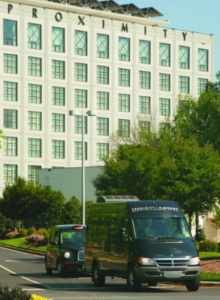 Quaintance-Weaver Restaurants and Hotels has become employee-owned, a move that company founders believe will prove advantageous for staff members.

CEO Dennis Quaintance said the biggest advantage for employees will involve retirement benefits. He referred to the new plan as, “a retirement program on steroids.”

Quaintance said that with retirement benefits provided by the Quaintance-Weaver Employee Stock Ownership Plan Trust, staff members ages 18 and up who work at least 20 hours a week will start accruing retirement units. They’ll be fully vested after three years.

He said the company had a 401(k) retirement program for its employees a number of years ago, but it was discontinued because of a lack of participation. Quaintance said the change makes Quaintance-Weaver one of only a few employee-owned restaurant and hotel companies in the country. He and others involved in the company’s management promised guests won’t notice a difference.

Quaintance and his wife, Nancy King Quaintance, will continue to lead the company. The couple said they and Mike Weaver, the company’s other founder, sold their interest in Quaintance-Weaver to the Quaintance-Weaver Employee Stock Ownership Plan Trust because they feel that’s the optimal way for the company to be owned and managed.

The move seems a natural one for the community-based, locally owned company, the Quaintances said. It fits with the company’s sustainable practices initiative, they said, which considers how decisions affect current and future generations, as well as their fairness doctrine for diversity and inclusion.

Dennis Quaintance said more than 50 staff members at Quaintance-Weaver have been with the company at least 10 years. The fact that so many people continue to demonstrate such a level of professionalism and commitment reinforced the decision to make it an employee-owned company, he said.

Dennis Quaintance said one of the reasons they opted to make the company employee-owned was to give staff members more reasons to work together as a team to take care of Quaintance-Williams’ guests and their colleagues.

“All of our interests are now aligned,” he said.

* 2007: Proximity Hotel and Print Works Bistro open and are the first to receive the U.S. Green Building Council LEED (Leadership in Energy and Environmental Design) Platinum Certification for a hotel and restaurant in USA;

* 2011: Dennis Quaintance receives the Citation Award from the National Conference for Community and Justice;