FROM GREEN PASTURES TO GREENSBORO WITH GREEN IDEAS: How Dennis and Nancy King Quaintance found each other and built their business from the ground up

Greensboro, NC, 2007: Who would have thunk it? A scrappy kid who got his entrepreneur confidence from selling rocks in the middle of the Nevada desert and a sophisticated Ivy League graduate fall in love, marry, and become business partners. Even more unlikely is that they are building what may be the most sustainable hotel in the United States, the Proximity Hotel, in an unlikely spot, Greensboro, North Carolina.

Dennis Quaintance ’s spirit of entrepreneurship started at age seven when he scoured the desert for interesting sedimentary rocks that he sold as “wonder stones” along a desolate stretch of Nevada highway. Later, while attending Hellgate High School in Missoula, Montana, he began his hospitality career at age 15 as a housekeeper’s assistant at a hotel. He quickly worked his way up to assistant general manager . After high school, he continued to learn about the business by working in leadership at several hotels around the Northwest and becoming a voracious reader.

Meanwhile in North Carolina, Nancy King left her home for summers and holidays at age 15 to work as a dishwasher at the just-opened Walt Disney World in Florida. Her performance and aptitude led her to become the youngest person at the time to graduate Disney University. Nancy went on to study Culinary Arts at Johnson & Wales in Providence, Rhode Island, before transferring to Cornell University where she received her BS in Hotel Administration.

In 1979, Dennis and Nancy’s worlds intersected when Dennis moved to Greensboro to help a friend open a restaurant. They met at that restaurant when the ambitious Nancy, at home from Cornell for the holidays worked at the restaurant for experience and money. They married in 1983.

While they had completely different pasts, their ideas, ideals, and intellect could not be more similar. Today, their company, Quaintance-Weaver Restaurants and Hotels, (they are partners with a great friend, Mike Weaver and other members of his family) includes the four diamond O.Henry Hotel and three restaurants. In November 2007, they opened the innovative Proximity Hotel, just possibly the most environmentally sustainable hotel in this country, along with the adjacent Print Works Bistro.

Perhaps Dennis’ childhood schooling in a one room school house in Nevada without electricity made him understand the value of conserving energy at a very early age. The hotel is being built to achieve the LEED (Leadership in Energy and Environmental Design) Gold or Platinum Certification by the United States Green Building Council. Dennis plays the role of CEO and Chief Design Officer and Nancy’s role is mentoring the operations and sales teams and participation on the culinary team.

What’s next? Dennis and Nancy’s twin children are now eight years old. Perhaps they will follow in their parents’ early entrepreneur footsteps and think up the next business. 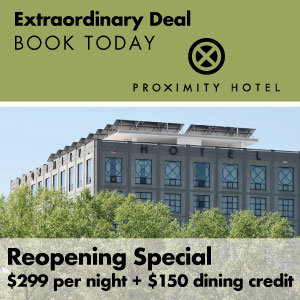